French is an integral part of the curriculum at Roedean. The teaching of the language has evolved over the years. Today, we place a large emphasis on the ability to speak and communicate, without jeopardising the ability to write idiomatic and grammatically accurate French. Most girls start as complete beginners in Lower V. By Matric, however, our girls are able to talk and discuss current news articles and to express their ideas on the poetry and literature we have studied. We explore a variety of subjects ranging from the role of women, to environmental issues, fashion, and modern trends such as social networks and cellphones. Our perspective is influenced by current trends in France and francophone countries. Classes are taught through the medium of French, making use of the latest method available. Currently, we have introduced ADOSPHERE, an interactive method which deals with all facets pertaining to the interests of teenagers. We work around topics such as the family, hobbies, food, and general civilization. Along the way, girls are exposed to art, musical trends, history and geography.

Our aim in the department is to give girls the tools to become global citizens. As South Africans, we have a unique opportunity to engage with people from francophone countries in Africa and further afield. No matter what the proposed career choice, we believe that learning French can add an extra dimension to a life, let alone a CV. To be able to speak and write French gives candidates the extra edge in the job market or the application for scholarships. The knowledge of a third language helps with the acquisition of a subsequent language. Research has shown that those who study a foreign language enhance their cognitive skills and achieve higher standardized test results in Mathematics, reading, and language. The study of a foreign language can also help to increase problem-solving skills, memory, and self-discipline. The partnership between Habits of Mind and the study of French is evident: striving for accuracy, building on past knowledge, thinking about thinking, and responding with awe and wonder to the wealth of literature which French brings.

In the Upper V to Matric classes, we make use of magazines, French songs and cinema to make the learning of French as immediate and as engaging as possible. Every two years, we embark on a three week trip to France for our French Homestay experience. The Homestay trip is open to girls studying French in Ante Matric and Matric. Our girls stay with a French family, experiencing the chance to live in a French home, eating and sharing cultural differences. Mornings are spent attending classes at a language school, while the afternoons provide opportunities to discover the region’s cultural heritage. We make use of the Centre International d’Antibes on the Cote d’Azur, and the renowned CAVILAM in Vichy, Auvergne. A few days are spent in Paris, making the most of the Parisian lifestyle: using the metro, visiting exhibitions and art museums such as the Louvre and the Musée d’Orsay, enjoying excursions to Notre-Dame and Versailles, exploring Montmartre, seeing the banks of the Seine from a bateau mouche.

All Lower V girls study French at Roedean. Those who study Music as a future Matric subject may take French as an extra option after school. There is a dedicated support French teacher who helps girls on an individual basis should they require remedial help or need to fit in an eighth subject choice. It all starts with “Bonjour!” With that simple greeting, each girl who chooses French embarks on an unforgettable linguistic journey.

Apart from French, Roedean has a proud tradition of encouraging the teaching of a variety of languages. Although French is the only language which is part of the set curriculum, there are several languages which are offered on a private-tuition basis. Roedean currently offers Mandarin Chinese, Spanish, Italian, German, and Portuguese. We have, in the past, also offered Arabic. 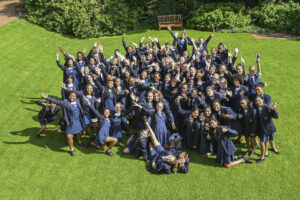 Roedean Matric Results 2020 are out!

Roedean School (SA) This is who we are

Since 2009, Thinking Skill have been an integral part of the curriculum, preparing pupils for the challenges of higher education and life itself. We strive to prepare our girls to lead ‘life of significance’ in a world of exponential change. Roedean is the only school in SA to be accredited as a Thinking School from Grades 0-12.